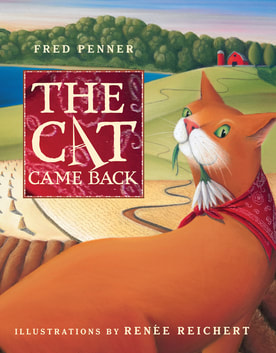 Like that cat, the song keeps coming back in a multitude of recorded and printed versions but never in better company than here. On to each terse verse and chorus, Reichert hangs plenty of subplot and detail, depicted in a luminous, soft-edged style (think Kevin Hawkes) that plays nicely to the hilariously exaggerated dismay of toothless old bachelor Mr. Johnson and his finned and feathered pets. The ginger cat earns a place on Johnson's lap only after coming back from the Humane Society with several feline friends, from the bottom of the sea with a mass of pirate gold, from the North Pole in a gift-wrapped box, and finally from outer space with a pair of green-skinned, three-eyed rescuers. Unlike many songs, the lyrics work equally well read or sung. A fine showcase, and a memorable children's debut, for Reichert.

... It's the art that's the real star here as it follows the man's efforts to rid himself of the persistent animal. His attempts begin modestly with building the cat his very own house, and get more and more outlandish, from dropping him into the sea to shooting him off into space, none of which work, of course: …the cat came back the very next day….He just couldn't stay away. Full-bleed spreads capture the antics of the annoyed farmer and determined feline as well as the animal onlookers. The book has all of the elements of a funny children's song/story, with extreme measures matched up with hilarious results. It's loads of fun. PreSchool-Grade 2

Longtime children's performer Penner serves up his purrfectly perky rendition of this traditional folk song for picture book fans. Like the proverbial bad penny, a certain stray cat keeps turning up on Mr. Johnson's doorstep. Calling the humane society, handing the kitty off to pirates and even blasting the furry feline into outer space do not do the trick; the cat always finds its way back, none the worse for wear. At last, by sheer determination, the cat curls onto Mr. Johnson's lap and presumably into his heart. In her picture-book debut, Reichert's rich and creamy pastels capture the sleek orange superkitty in all its silly glory, whether sporting an eye patch or decked out in a space suit. Mr. Johnson's stubbly beard, tiny round spectacles and frequently flabbergasted facial expressions add to the jaunty, comic tone.  Ages 4-8